Does Your Pond Stink – Find Out Why!

People often take solace in creating a relaxing environment in their homes. This can come in the form of an outdoor kitchen or fireplace, or perhaps a patio with furniture. Many people also build ponds in their backyards to create and tend to a biome. However, as with any organic environment, occasionally it can get stinky if some of the waste isn’t given proper attention.

A stinky pond doesn’t just repel people and animals, but it can seriously harm the fish and other animals who live in and around the pond. Below, we’ll discuss the causes of pond odor, how to treat water chemistry, and the best practices you can take to prevent a stinky pond in the future.

What Are The Causes of Pond Odor?

Stagnant Water
When water becomes still and doesn’t circulate, this causes the water's oxygen levels to drop. When that happens, the aerobic bacteria become unable to break up waste from animals and plants. The anaerobic bacteria that break it down gives off hydrogen sulfide, which produces an odor similar to rotten eggs.

Algae Bloom
You may recall reports of beaches closing due to algae blooms. This occurs when there’s an increase in algae in fresh or marine water, which discolors the water and kills off fish and other animals due to the toxins they produce. Not only does this toxicity kill animals, but it produces a smelly odor and a bad taste.

Microcystis is a type of bloom that looks like someone spilled some green paint or dumped a lot of pea soup into the water. Some species of microcystins produce liver toxins that kill fish, humans, and livestock. This type has been linked to liver cancer and skin irritation. This type of algae bloom type has a pigpen odor.

Another algae bloom type that produces a pigpen odor is the Anabaena. It resembles the Microcystis, but it is more of a filamentous algae and is less dispersed. The cells also have thicker walls and aren’t pigmented. These blooms occur in waters rich in phosphorus and are capable of producing a neurotoxin and a liver toxin that kills people, pets, wildlife, and livestock.

Dinobryon is another odorous algae bloom. This one is the cause of red tides in marine systems and causes the water to smell like a cat’s urine or have a fishy odor. Prymnesium is mainly a saltwater type, but there are reports found in Pennsylvania and West Virginia and produces a liver toxin, neurotoxins, and a fish toxin.

Determine the difference between aeration and filtration

Pond aeration is maintaining or increasing the amount of dissolved oxygen in a pond. This process brings water into contact with air, which results in consistent oxygen levels in the water. Natural sources of pond aeration include heavy rain, wind, or even waterfalls. If these are not present or aren’t consistent enough for the pond’s needs, mechanical options become necessary.

A good filtration system, whether biological, mechanical or both, helps keep the water clear and clean. Biological filters use fish and plants to break down waste in the pond into a less harmful compound, which can then be used as a fertilizer.

Water sterilizers take everything through a tube to have an ultraviolet bulb kill microscopic particles within the water. A mechanical filter removes debris and sediment. These filtration types may move the water in the pond, but they do not add to the pond's oxygen level.

When you put a diffuser at the bottom of the pond, it takes the stinky and potentially bad water at the bottom and lifts it to the surface. When this happens, not only does the water receive more oxygen and heat, but the stinkiness is released back to the atmosphere and the waste can then start to break down as it should.

Once the water travels out of range of the diffuser, it then sinks back to the bottom of the pond, where it is then pushed back up at a different time.

Combined with an aerator and filtration system, pond diffusers are highly effective. You have a combination that filters out waste and increases the pond's oxygen levels to prevent stagnation and algal blooms. Then, there’s a diffuser to bring water and sediment from the bottom of the pond to ensure that waste is broken down and gases are released back into the atmosphere.

Pond muck is no fun to encounter. While it’s expected to encounter mud at the pond's bottom, the pond doesn’t have to have an algal bloom to be considered dirty. Fish and animal waste, decaying animals and plants, grass clippings, as well as branches, leaves, and other organic matter accumulates at the bottom of the pond and decays. This turns into a dense muck that becomes home to leeches and raises the pond's bed by several inches or feet.

Eventually, anaerobic bacteria tries to break down the pond muck. However, this produces hydrogen sulfide, which smells like rotten eggs and makes the pond a toxic place for fish and other animals. Not only does this process produce hydrogen sulfide, but it produces methane and ammonia as well. 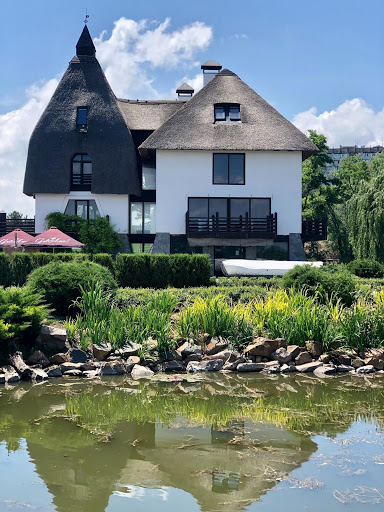 Planktonic algae, whether Anabaena, Closterium or other varieties, have an ecological importance to the food chain in ponds, rivers and lakes. The diversity and the density of this planktonic algae determine what type and size fish the pond will support.

While algae blooms are harmful to fish and the surrounding life, a proper balance is needed to support life within the pond. Too much, and there’s an algae bloom or pond scum, too little, and the pond won’t support fish and other aquatic life.

The Role of Water Chemistry

One way to test the chemistry of the pond water is by checking the pH level. This tests how acidic or alkaline the water is. This scale ranges from 0 to 14, with neutral at 7. Anything below seven is considered acidic, and anything above 7 is considered basic or alkaline.

Knowing the pH range that’s best for fish and other organisms living in your pond is important. They prefer a pH level that ranges from 6.5 to 9. It’s normal for pH levels to change throughout the day with the water becoming more acidic during the nighttime and more alkaline during the day.

PH also affects decomposition and bacteria in the pond. If your pH is too high, the bacteria needed to decompose organic matter will not survive.

Another thing to check for when you’re testing for chemistry is how hard or soft the water is. Hard water limits plankton growth, which in turn limits the growth of fish within the pond. Additionally, if you’re considering treatments for algae and other issues, hard water decreases their effectiveness. 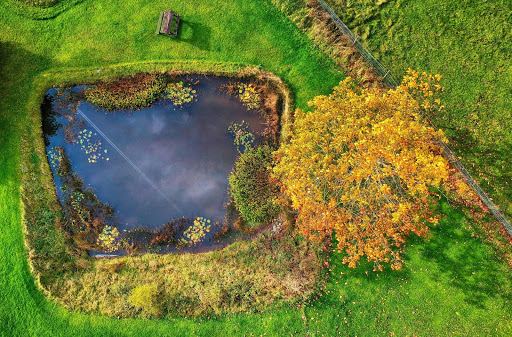 To treat pond water on the alkaline side, the easy way to do it is to add carbon dioxide through soybean meals or cracked corn to the water. If the water's pH is below 6.5, then baking soda is an easy way to raise the pH. For every 5 to 10 gallons of water in the pond, you would need 1 teaspoon of baking soda.

The Impact of Temperature

Fish that live in warm water, such as bluegill, bass, catfish, walleye and others prefer water in the 80s. If the water temperature becomes too high in the pond, the coldwater fish won’t tolerate it for long. The same goes for warm water fish in cold water.

How Do I Remove Pond Stink?

There are a few solutions to get rid of pond stink. These include increasing the aeration and diffusion of the pond, as well as others.

Increasing Aeration
Increasing the aeration provides more oxygen and nutrients for animals and organisms living in and around the pond. Increased aeration also prevents algae blooms and stinky pond bacteria. The fish, other animals, and plants will be happy with the extra oxygen in the water.

Cleaning Debris
All ponds have some sludge in them from decomposed organic matter, but if it starts smelling of rotting vegetation and eggs, then it’s time to do something about it. One option is to do a complete pond drain to remove the debris. However, fish and other organisms will need somewhere to go during the cleaning period. Nets are a good option if the debris is made up of mostly leaves and small branches. 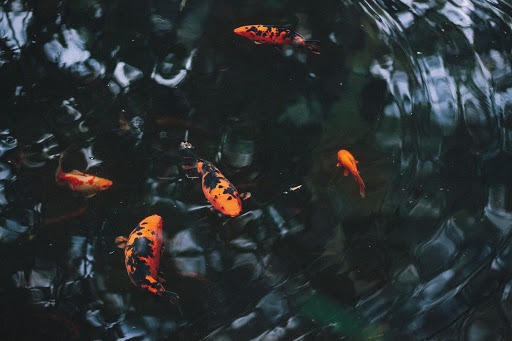 Removing Organic Waste
Another solution for getting rid of pond stink is to remove any fish that may have died over a cold winter. Cold temperatures kill fish due to low oxygen levels or harmful gasses built up in the water if the pond froze.

Nitrogen is important for life. The air we breathe contains 78% nitrogen, and it’s also found in our DNA. Nitrogen comes in three forms for those working with ponds: nitrite, ammonia, and nitrate.

Nitrates are used as food for plants. In high amounts, nitrites are toxic, and ammonia is highly toxic no matter how much, or little is there.

All organic material that’s broken down by beneficial bacteria becomes ammonia. The bacteria then turns the ammonia into nitrites. That bacteria is called Nitrosomonas, but another bacteria called Nitrobacter turns the nitrites into nitrates.

Plants absorb the nitrates and release it into the air as nitrogen gas. If the water has too many nitrates, then it leads to an alg

While nobody wants to smell these, it’s important to know what’s not a normal smell. The common bad smells include:

Results take time to come to fruition, and what you might have to do each week may vary. One week all you need to do is test the water's pH and, the next week, you may have to remove some sludge a few times.

Best Practices For Taking Care Of Your Pond Equipment

As winter approaches, be sure to winterize your hardware as you don’t want it to rust from the snow or crack due to fluctuating temperatures. Make sure the pond is clean, so decomposing debris doesn’t lower the pond's oxygen levels too drastically. Another step to take is to turn off the aerator and diffuser pumps and clean the pond filter.

One more thing to do before winter arrives and the pond freezes is to add cold-water beneficial bacteria. This helps break down fish waste to keep the pond clean and clear during winter and prevent toxic gas buildup.